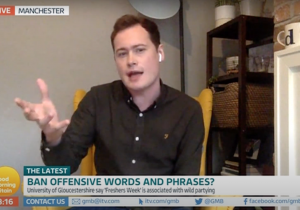 Good Morning Britain – Are We Too Sensitive About Words and Phrases?

I joined Kate Garraway, Alex Beresford and University Challenge legend Bobby Seagul to talk about language. Have we become too sensitive about words and phrases? I don't think so - it's right to stop and take a look at our language and make changes if we need.