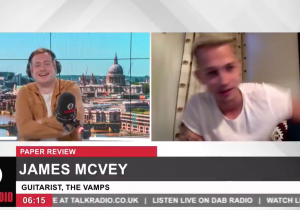 The music industry has been hit hard by the Coronavirus crisis, with bands, artists and crew alike missing the fruits of live gigs. The Vamps guitarist James McVey joined me on talkRADIO this weekend to answer that key question - can socially distanced gigs really work?