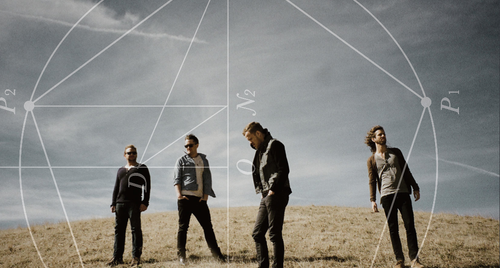 …the stadium filling euphoria you can get from Muse on a good day and the enchanting folk riff of Mumford and Sons – but with that edge that Mumford frustratingly lack.

When American artists arrive in the UK, you’ll often find them buzzing with enthusiasm for our humble isles and it’s musical offerings, past and present. Sometimes it stinks of PR – claim how much you love The Lancashire Hotpots in a desperate bid to be accepted. Then, occasionally, you meet a band that truly ooze a desire to be here, to be playing venues and festivals they’ve dreamed of all their lives and to share a stage or studio with their favourite British artist. We are charmed by their enthusiasm for the things we take for granted – the same charm that probably endears them to us.

This week, I had the pleasure of meeting a band that more than ticked the latter box. Huddled together in a basement studio on a dull, dark afternoon in central London, were Imagine Dragons. Well, three of them. The fourth had received a rather nice ‘Welcome to England’ gift in the form of Norovirus and the rest weren’t exactly a picture of health either, coughing and spluttering their way through the interview. Having flown in from LA the day before and anticipating a Eurostar journey to Paris later that day, the demands of fulfilling their dream in Europe was clearly taking its toll. A member down and quite obviously under the weather, you could have forgiven them for being a bit off form – longing for the comforts of their hometown in LA. But that couldn’t have been further from the truth.

They were passionate, intelligent, charming and effortlessly cool. Their genuine love for the British music scene seeped through in everything they said. They were galvanized by the mention of the summer festival season and will be using it to “make some dreams come true”. They couldn’t confirm what was on their agenda but there was a definite hint of Glasto excitement – it’s an excitement different to any other and can be spotted a mile away.

They are ready to go with an album later this year that will, without doubt, make its mark. Below you’ll find the video to ‘It’s Time’ – which brings together the stadium filling euphoria you can get from Muse on a good day and the enchanting folk riff of Mumford and Sons – but with that edge that Mumford frustratingly lack. Check them out below and book the summer off work; you’re going to want to follow them around this land of ours they love so much.