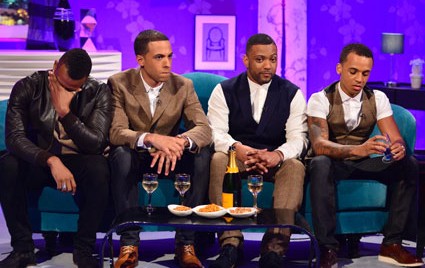 We invited JB from JLS (R.I.P) onto The Hits Radio Breakfast Show this morning to have a go at playing co-host – maybe a new, post-band, career?

We chatted about the split and JB admitted they knew the news was coming a few months before it went public. I suggested that must have been tough for them but he insisted it was harder for the families…

It’s such a big thing and it came from the four of us, it was a little bit difficult for them to take.”

But we aren’t done with them jet, JB says the boys are still best mates and we’ve got the greatest hits album, a tour and maybe a new single to look forward to.

“It’s going to be very final on that last tour date, but we knew a long time before we made the announcement. For us, we’d already made our minds up and we were on the same page. It was sad to see the reaction from the fans but it was something we thought was right for the time.”

He also hinted at a comeback. Telling me that, if the boys ever got back together, he’d love to play a guest spot at Glastonbury.

As for now, he’ll be pursuing his passion for farming and was very good at radio presenting. Worryingly good. I don’t think I’ll be inviting him back.

All smiles. JB is in a good place despite JLS (R.I.P) going their separate ways.